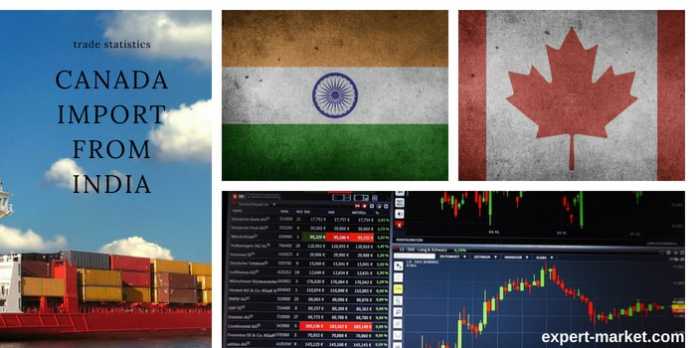 Canada and India share a special relation as both of the countries have been former colonies of Britain and belong to the list of commonwealth nations. Both the countries in the past have advocated free trade and have partnered to boost trade ties. As of the year 2016, India and Canada had a trade ties of $5.60 billion which is expected to grow to $10 billion by 2020. India’s export to Canada stood at $1.98 billion in FY 2016 while the import stood at USD 3.64 billion for the same time.

The trade between the two countries has seen unprecedented growth and is expected to grow to multifold in the next three years. According to PHD Chamber of Commerce and Industries, India’s export to Canada is expect to grow up to USD 4 billion in the year 2021 from the present USD 1.96 billion. As the growth in export increases so will be the opportunity for Indian exporters. This will boost business in India and will definitely do well for exporters in India. If you are interested to export from India to Canada then here are top 20 items that are mostly exported to Canada.

Articles of Iron or Steel:

India is one of the leading exporters of organic chemicals. Organic chemicals are largely produced in India in various research factories owned by the government. In FY 2017, India had an earnings of 185292 thousand US dollars.

Indian pharmacy is quite big market and thus it exports a good part of it to the world. In FY 2017, Canada imported many pharmaceutical products that earned India 170336 thousand dollars.

India has recently advanced itself in exporting machinery, boilers and nuclear reactors to many countries including Canada. This gives India a great source of earnings. India earned 128972 thousand dollars by exporting such items to Canada in FY 2017.

Articles of Apparel and Clothing that are not stitched:

India is known to be a hub for textile production and apparels. Known for its various artistic touch, India exports many types of apparels and clothing to the world. It exported such items that worth $124340 thousand to Canada in 2017.

Vehicles apart from Railways and Trams and Parts thereof:

India is one of the biggest market for railway products as Indian railway is the biggest employing public sector unit. India exported such items that worth $120711 thousand to Canada in 2017.

Other Made up Textile Articles, rags, sets and other worn out textile and articles:

Being one of the biggest textile producer India also generates lots of worn out textile and articles. Utilizing them well India exports them to Canada. In FY 2017, India earned $119603 thousand from exports to Canada.

Fish and Crustaceans, Mollusca and other Aquatic Invertebrates:

India is known for its rich aquatic market as it surrounded by sea and fresh water rivers. Through exports, India earned 118197 thousand dollars from Canada in 2017.

India is one of the major destinations and market for pearls and precious stones apart from precious metals like gold. Through exports, India earned 109534 thousand US dollars from Canada in 2017.

Articles of Apparel and clothing Accessories, stitched or crocheted:

India is not only one of the largest consumer but also one of the largest producer of Plastics and articles of plastic. Most of them are exported to countries like Canada. In FY 2017, earnings of 77005 thousand dollars were made by India through exports to Canada.

India has done a stellar job in producing and exporting many of such items which once was imported in India for general consumption. In FY 2017, India earned 46821 thousand dollars from Canada by exporting such items.

India has made tea gardens which export tea to the world. Coffee is commonly grown in South India while spices are grown in South as well. India had a revenue of $41304 thousand from export of such items to Canada in 2017.

In 2017, India generated a revenue of $40415 thousand by exporting rubber and rubber articles to Canada.

Many of these products that are manufactured in India are exported to Canada. In 2017, India generated a revenue of $36508 thousand from exporting them to Canada.

India generated a revenue of $35037 thousand from export of aluminum and aluminum articles to Canada in 2017.

Articles of Leather, harness and saddlery, travel goods, handbags and similar containers, Articles of Animal Guts: Revenue generated by exporting such items was 34045 thousand dollars to Canada in 2017.

Apart from these, many other products are exported to Canada from India. The market seems to be increasing in pace and is expected to reach $10 billion by 2020. This will open wide range of product export thus benefiting exporters from India.