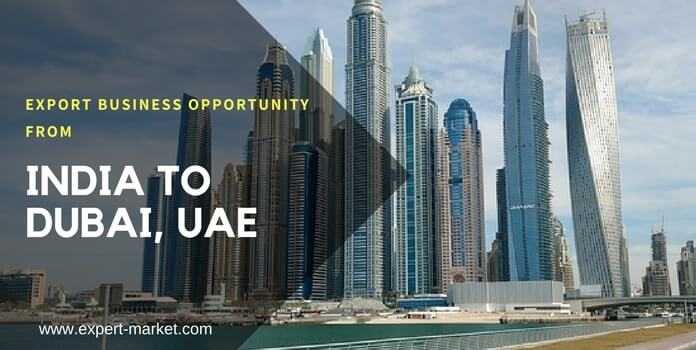 India and the United Arab Emirates share one of the most comprehensive and strategic relationship in comparison to any other Arab country. Not only in oil section, India has also been a leading exporter of non-oil products to UAE since years. India ranks third in the list of highest exporters to UAE. UAE’s import from India accounts to 9.2% of the total import. India and UAE had a $60 billion trade in the year 2014 which is continuously rising. This makes UAE India’s most popular trade partner in the gulf and Middle East region.

It is expected that by the year 2020, India and UAE will have $100 billion trade given year on year rise. With the recent visit of UAE leaders to India in 2017 and Indian Prime Minister’s visit to UAE, it is expected that trade relations will grow to multiple levels in times to come thus opening a great bay of opportunities for Indians to export and import from UAE.

If you are interested in exporting goods to UAE then here list of 20 most exported items from India to Dubai, UAE.

Stones, pearls, metals and many other such products are exported by India to United Arab Emirates. The export from India to UAE stood at 12042190 thousand dollars in FY 2017.

Articles of Apparel and Clothing that are stitched:

India being a leader in production of apparel and clothing exports it to many countries around the world including UAE. India’s export to UAE in FY 2017 stood at 1960509 thousand US dollars.

Articles of Apparel and Clothing that are not stitched:

India not only exports stitched cloth and apparels but also unstitched ones. UAE imported a large stock of such products from India that had a worth of total 1501497 thousand dollars in FY 2017.

India has been a valued partner in exportation of ship, boats and other such floating products to UAE. In FY 2017, India exported 1391042 thousand dollars’ worth of products to UAE.

India has been a valued partner of UAE when it comes to exportation of steel and iron products. India exports ores and products of iron and steel. In FY 2017, India exported iron and steel products worth of 772598 thousand dollars to UAE.

India has been exporting machineries and boilers including other related products to UAE. India exported products worth of 689174 thousand dollars to United Arab Emirates in FY 2017.

Products and parts of electric machines and other such equipment have been on rise since years when it comes to export. India and UAE have been doing well in this field as well. India exported products worth of 612785 thousand dollars to UAE in FY 2017.

Cereals include various items like bread, flakes, oats, etc. are also exported to UAE from India. In FY 2017, India earned 523902 thousand dollars from UAE by exporting cereals. In FY 2016, the revenue through cereals was 655548 thousand US dollars.

Articles of Iron or Steel:

India is also a leading producer and exporter or copper and articles of copper. India in FY 2017 exported product worth of US dollars 416871 thousand while in FY 2016, the earning through export was 309727 thousand US dollars.

India also exports fruits and nuts to UAE. Fruits are both fresh and packaged while nuts are well packaged. India earned US dollars 365448 thousand by exporting such products in FY 2017 to UAE.

India has many chemical factories and research institutes that manufacture premium organic chemicals. Many are utilized within India while a good amount is exported. India had an earnings of US dollars 340272 thousand in FY 2017 from organic chemical export to UAE.

Vehicles apart from Railways and Trams and Parts thereof:

India has been producing products and parts of railways and tramways in India. Many are utilized within India while many are exported. In FY 2017, earnings through export of such product was US dollars 295104 thousand to UAE.

In FY 2017, India earned 291784 thousand US dollars by exporting such compounds and chemicals to UAE.

Fish and Crustaceans, Mollusca and other Aquatic Invertebrates:

India has been doing well in export of such products as well. In FY 2017, India earned US dollars 185355 thousand by exporting such products to UAE.

India also has productions of perfumery and essential oils apart from resinoids and toiletry preparations. By exporting such products to UAE, India earned US dollars 168871 thousand in FY 2017.

Thus, if you are will to go for export business to UAE there is a huge market out there with series of products. There are many more products apart from these 20 that have been exported from India. They also are quite promising as their demand is rising and they offer great returns. You can try out such products that are in demand in UAE and boost your export business.