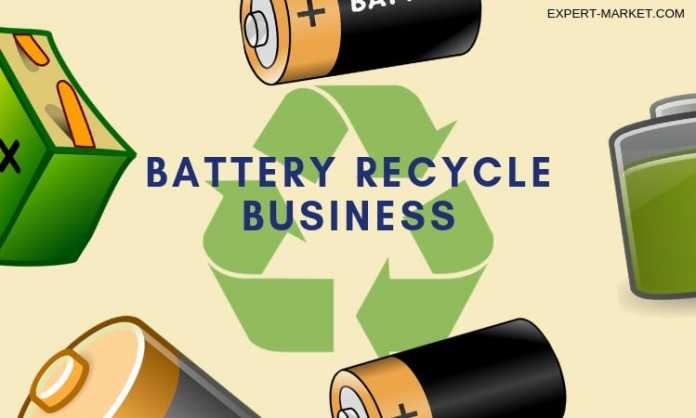 We are surrounded by a world of electronics where most of the items we use has some electrical aspect in it. Similarly, there are many electronic equipment that we use which is portable and that means that it works mostly on a battery. A battery to be specific is a device that contains one or more electrochemical cells that produces electric energy used to power electronic devices.

Some of the example of electronics that use rechargeable batteries are smartphones, laptops, invertor, batteries used in vehicles, etc.

But after a prolonged usage each of such batteries lose their character and become useless. Such batteries in earlier times were discarded but now they are recycled to be used for further purpose. Since there are many items that use batteries therefore the battery waste creation is huge and same is the recycling of such batteries.

If you are interested to invest in a battery recycling business then it could turn out to be a very profiteering business.

What is Battery Recycling?

There are chemical substance in the battery that lead to its energy production. After regular usage the chemical material depletes and the battery becomes useless. Recycling ensures that the basic structure of the battery remains the same while only the chemical part is recycled for further usage.

Not every battery is made to be recycled and even if you do so it is time taking, costly and also not much efficient.

Thus there are only few types that can be recycled with efficiency. The manufacturers while making those batteries focus more on the present usage and not much on the recycling thus chemicals used in manufacturing such batteries cannot sustain recycling.

As we go further we must know the different types of batteries that are in usage and how they can be recycled.

What Kind of Batteries are used for Recycling Process?

Here are the Type of Batteries that can be Recycled

Lead Acid or lead batteries are one of the most commonly used batteries. They hold a distinction in recycling rate to nearly 100% which is the highest in any kind of recyclable batteries. Lead batteries not only have efficient recycling record but recycling them is also cost effective.

Since recycling of batteries will only take place given it has some profit, lead batteries hold distinction in it since they are cheap to recycle. Most of the recycling business is held by manufacturing companies who buy the used lead batteries from the customers or they give discount on the new batteries in return of old batteries. The remaining lead is extracted and then is used in new batteries.

Nickel Cadmium Batteries were one of the most popular used batteries in earlier times but during 90s the sale of these batteries dipped after NiMH and Li-ion batteries conquered the market. They are also hazardous in nature and therefore the United States, EU and many of the countries have banned its sale.

These batteries don’t pose such serious hazard but are still dangerous. They can be recycled using special care. Most of the nickel these days are used for production of steel as it becomes a cheap source of nickel. Most countries have banned the usage of NiMH batteries.

These batteries and their recycling process requires special care and thus can be a bit expensive in recycling. Before you invest in recycling NIMH batteries you should do thorough analysis of NiMH recycling business and the profit arising out of it.

Lithium batteries are commonly used these days and they are highly reactive in nature when they come in contact of moisture. These batteries require strict recycling process and strict rules should be follow for recycling it.

Before you indulge in the battery recycling business you must do better calculations regarding cost of recycling, favourable market for sale of recycled products, etc.

The huge numbers in which they are produced and are dumped has become a reason for concern now. Most of them are recycled not because of profit but to avoid the hazardous nature.

Many companies have subsidized the recycling of these batteries. One can do proper research and go ahead with the recycling business.

Alkaline batteries are quite safe for usage and disposal as well because of the reduction in mercury contents. A used alkaline battery contains zinc and manganese but extracting them from the battery isn’t much of use since extracting them requires complex process and the profit from the same is very less until the recycling is done on larger scale.

One can still research on their recycling process and if profit seems to be answer then one can go ahead.

If you have known what kind of batteries can be recycled then one should move ahead to know how batteries are recycled and what is the exact process of recycling a battery. The process obviously depends from battery to battery.

Here is a Brief Explanation Regarding the Process of Battery Recycling

Steps involved in battery recycling are as follows:-

Recycling battery requires a number of steps which is quite complex and requires a professional and standard handling. Every such battery contains heavy metals and toxic elements and therefore a careful handling is must.

Below are some types of batteries and their recycling process.

In order to recycle lead acid battery you need to go through five steps.

Collection: The first step involves collecting the waste batteries and putting them to the facility center where recycling process will take place.

Crushing: The second step involves crushing of the batteries using hammer machines that breaks them into small pieces.

Sorting: This involves segregation of heavy metals and toxic substance from the plastic waste.

Pyro metallurgical and Hydro Metallurgical Process: The last and final step involves the process of extracting the metals from their ores. Heavy metals like lead are extracted using hydro metallurgy where aqueous chemistry is used.

The process is then complemented by pyro metallurgy which helps in restoration of the heavy metal in chemical and physical form. This process uses calcination, smelting, roasting and refining to get the final product.

The lead that is retrieved is cleaned to remove any impurities. Later on they are melted and cooled down from where lead plates are made that are used to manufacture new batteries and other such products. Even the battery acids are used which can be turned into sodium sulfate which is commonly used in detergents.

These batteries are recycled up to 99% where the battery is dismantled into three chief components and from there they are used for further recycling. The three components include:

Almost 99% of the components that these batteries contain gets recycled using various process. The plastic is first removed from the battery and then is recycled for further usage. Similarly, heavy metals from the battery are removed through a High Temperature Metal Reclamation process.

The process reclaims metals such as Nickel, manganese, iron, chromium, etc. Using methods like pyro metallurgy the later process are executed and the extracted elements are cleaned and used for manufacturing new batteries. A significant amount of care is required while going through the process as these batteries are toxic and hazardous in nature.

Almost all the elements recovered from the battery is used making it 99% recyclable.

Mercury batteries are recycled in a controlled temperature since the level of toxicity in the battery is quite high. In a very controlled environment the recycling process starts where pyro and hydro metallurgical process takes place.

The mercury that is extracted is further used for manufacturing new mercury batteries while the other remaining products according to their value are used.

It should be noted that the usage of mercury based batteries have decreased in the recent while. Mercury battery recycling is also a costly process that has much loss more than profit.

As you have understood the process of recycling batteries it is also very necessary to understand what kind of equipment are required to recycle such batteries.

In order to start your recycling business what you require is that you have setup a recycling plant at the choice of yours. The plant will consist of various machines that will be used in the recycling process.

The requirements of machine will depend on the choice of batteries you have made to recycle. Where you need to use the pyro and hydro metallurgical process you require different sets of machines. Here are some of the equipment that you will require in general:

Most of these machines and equipment are costly and it would be recommended to lease them in order to avoid extra load on budget.

Financial Aspects of a Recycling Plant

Finance is important while starting any kind of business. Before you invest a single penny in your business make sure you have a plan to get the returns. Battery recycling is a profitable business but it is not that simple to get returns. You have to be very specific about what kind of batteries you aim to recycle.

While recycling some it becomes expensive and thus your profit reduces. To be straight, recycling plant business requires a good sum of capital as investment.

Around 15-20% of the total investment will be spent on machineries and installation of recycling plant. While 3-5% of the amount will be spent in maintenance. It would be better to lease few of the machines if possible in order to reduce the expenditure.

How to Manage the Capital for Battery Recycling Business?

It is obvious that this amount of money is not small. The best way is to get a loan from the bank in order to start your business.

The amount stated is a liberal amount and can be reduced given you manage to reduce to cost of land where you will operate the business, cost of machines and plant, reduce operation cost, increase production and maximize profit.

It is obvious that you will sell the recycled battery and its product to some principle company that works in battery manufacturing field but one can maximize profit by manufacturing and selling products at first hand.

There are many small products that can be manufactured out of it. You can also work recycling specific parts that will require lower investment. A used battery in its normal condition is sold at lower price than a battery that is broken and its piece is segregated where only the metal part is sold. You can use all such methods to reduce expense and increase the profit.

ABOUT US
Expert-Market is a free business resource site for entrepreneurs. Expert-Market was founded in August 2014. The main goal of this site is to provide new business ideas, business plan, marketing strategy, finance tips and other business resources that allows beginners to achieve success.
© 2014 - 2020 www.expert-market.com
This website uses cookies to improve your experience. We'll assume you're ok with this, but you can opt-out if you wish. Cookie settingsACCEPT
Privacy & Cookies Policy