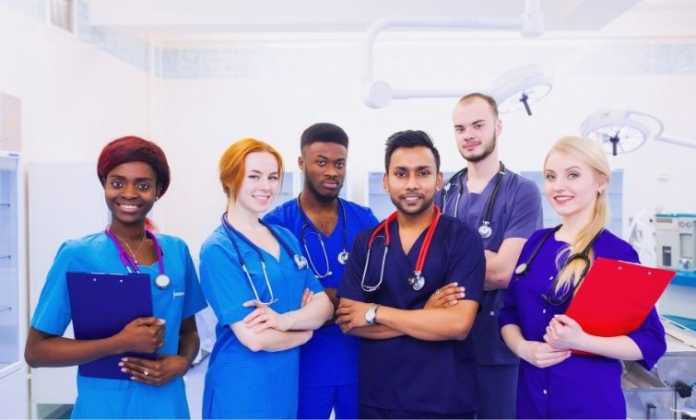 Health workers are essential to any society. Throughout history, the need for medical researchers and practitioners are heavily relied upon to protect communities. Developments in the medical field have allowed people to move forward and bring about more innovations.

Working in the health industry is important, but it’s also challenging. Hospitals are some of the busiest environments in the world, for obvious reasons. Saving lives is a continuous effort and quick succession of tasks. The organized work in hospitals carried out by all kinds of health professionals is what patients rely on. Without their hard work, patients won’t be cared for correctly, which can have detrimental repercussions.

Shift after shift, health workers don their armor, also known as scrub suits, before they pace the hospital halls. Scrub suits have evolved throughout the years.

These days, there are more options in design and cut. Many are tailored to be much more stylish, such as kewsi women scrubs developed specifically for female medical professionals.

But have you ever wondered why doctors, nurses, and other hospital staff wear scrubs? What makes scrubs better for healthcare than other clothing pieces? What’s it made of, and who thought about using it for medical work?

As you know, hospitals are kept as clean and sterile as possible. There are many infectious diseases in these environments, so everything needs to be considered, including the clothing of professional health workers. It’s functional and a necessary part of safety protocols. To give you a better grasp of scrubs, read on to learn more about its history.

Before scrubs were used, surgeons and nurses didn’t have proper working attire until sometime in the 20th century. You might have noticed from movies that doctors would come in their regular clothes and put on an apron to stay neat during this period. Then, they would roll up their sleeves and treat the patient. You can imagine how unsanitary this was and just how risky it was for both the patients and doctors to get an infection.

The antiseptic theory by Lister gained traction in the year 1918 due to the Spanish flu pandemic. Being highly contagious, they needed to prepare for the infectious outbreak. Medical practitioners had to take more safety precautions to prevent catching and spreading it. For surgical operations, cotton gauze masks were worn so the medical professionals wouldn’t catch the virus. They also had to use some strong cleaning solutions to sterilize surroundings and equipment. Additionally, heavy-duty rubber gloves were worn too.

Early Days of the Aseptic Technique

The aseptic technique that is used today is meant to prevent harmful bacteria and pathogen contamination. This method, developed in the 1860s by Lister, is done in health care settings like surgery rooms and clinics. But it advanced and became more widely used in the 1940s. During this time, gowns meant for surgery rooms, as well as antiseptic drapes, were used. But they also began using ethylene oxide or high-pressure steam to sterilize equipment and dressings.

Earlier on, white is the color choice for medical practitioners. It’s still used today, but you can see that blue, green, and gray are also used in surgery. Beforehand, white was the standard choice for surgery garments, but it can be harsh under the bright lights. Surgeons would have difficulties seeing what they were doing due to the glare, so they switched colors to reduce eye-fatigue.

The modern-day scrubs seen today started in the 1970s. V-necks paired with drawstring pants or short-sleeved mid-length dresses made from a material made from a combination of polyester and cotton were used.

These days, ‘warm-up jackets’ can also be worn as part of the whole scrub suit ensemble. It’s different from the white coat worn by doctors, as they’re only waist length. It also doesn’t have cuffs and lapels.

Why are they Called ‘Scrubs?’

The 1970s uniform was commonly called ‘surgical greens’ due to its color. Later on, they started to call them ‘scrub suits’ or ‘scrubs’ because they wore them in a sterilized or ‘scrubbed’ area. To keep the cleanliness in check, scrubs were worn with a tie-back cloth cap, masks made from synthetic textile or gauze, a surgical gown, closed-toe shoes, and latex gloves.

Who Else Wears Scrubs?

Everyone in a hospital wears scrubs, not just the medical staff. Custodians and clerks should also put scrub suits on to maintain the sterile environment. Doctors are allowed to wear their own clothing with a white coat. However, they are not allowed to wear their own clothes in the surgery room. Outside garments are not allowed inside, even if you put scrubs over them.

Aside from hospitals, scrubs are also worn in other medical facilities like dental clinics and veterinary offices. Surprisingly, scrubs are also used as prison uniforms, in orange, of course.

During surgery, the scrubs worn should always be light green, light blue, or light gray. On the other hand, non-surgical scrubs can come in more colors, patterns, and even prints. Scrubs with cartoon prints are very popularly used in pediatric offices, children’s hospitals, and dental clinics to make it a lively and friendly environment. It’s used in veterinary offices, too.

Color-coding is used for scrubs to identify the department the worker belongs to. For instance, those who work in surgery, emergency, and childbirth departments will have varying colors for their scrubs. It can even include other employees in the hospital who might not be part of the medical staff.

How are Scrubs Cleaned?

To maintain sterility, scrubs are usually not privately owned. Hospitals typically provide or lease the scrubs to control how it is cleaned since doing laundry in your home might not be up to standard. Disposable scrubs are also used to deal with this problem.

Scrubs During the COVID-19 Pandemic

In the light of the COVID-19 pandemic, scrubs are becoming even more popular for sanitary purposes. You might see them worn in schools, restaurants, and gym facilities to keep the virus from spreading.

Scrub suits were created for hospitals and other medical operations to remain hygienic. However, it isn’t limited to that use, as it has also been used for other places where public safety is crucial. Moreover, with the COVID-19 pandemic becoming a worldwide issue, scrubs have branched out to other facilities. Scrubs are a relatively young invention, and we can expect more changes in their design and use in the coming future.