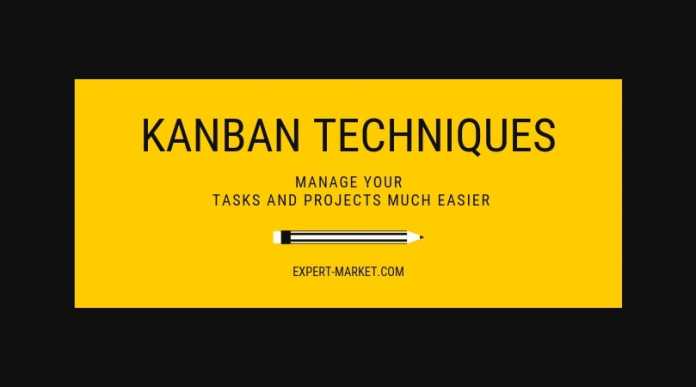 The idea with Kanban is to deal with task management differently than, say, a traditional To Do list. While a list of tasks is an excellent method with a limited number of actions to take and one person running through their list, it begins to become less efficient as the sheer number of tasks, their complexity through sub-tasks, larger projects and working within a team, impacts its effectiveness.

Kanban isn’t new. It was used by the Toyota car company in Japan back in the 1940s to manage a leaner production facility where vehicles were manufactured based on incoming orders and not keeping to a fixed production schedule. Their just-in-time approach helped the car company produce vehicles sooner without manufacturing ones that no one wanted because the color wasn’t right, or it lacked another important feature present in other Toyota models.

Using the Kanban technique, businesses are able to manage their tasks and projects much easier. The basic concept is that each task is given a card and placed in a column/board. The initial three columns/boards are usually labeled: ‘Requested,’ ‘In Progress’ & ‘Done.’ The labels can be swapped out to make more sense to someone, so ‘Requested’ might become ‘To Do’ if that aids clarity for people on the team.

A card (with its task) is moved into the respective column/board to reflect its status. The card contains details like the task title, any sub-tasks relating to it (optional), and the person or people assigned to that task. The creation date and due date are usually added too.

The idea with the Kanban system is that anyone can visually scan the columns/boards and see what tasks are outstanding. Color coding might be used for cards to indicate which team or person is responsible for each task. Using Kanban online software by Kanbanize, it makes it much easier to enter information and visually scan the information to see what is outstanding.

What Are the Advantages of Kanban for Businesses?

When using Kanban, it provides a visual snapshot of how many tasks there are and what stage they are in the process. One of the main focuses of the system is to actively avoid too many tasks being ‘In-Progress’ at any one time. This also goes for assignments to a team or individual.

With this approach, it’s easier for a manager to assess whether a person or team has too much going on. Staff can easily get bogged down when they have too many open loops. The human brain doesn’t juggle too many tasks or projects particularly well. Because of this, it’s best to limit how many ongoing tasks there are.

Workflow management is also improved because when there’s a bottleneck, it’s easier to spot. A member of staff gets stuck on a task and cannot clear it quickly. It sits in the ‘In Progress’ board for a while and this gets noticed. A manager can intervene to see if they would benefit from a second pair of hands to offload part of the task and speed up its completion. This removes the bottleneck, so other tasks can be moved to the ‘In Progress’ column.

How Does Kanban Helping with Rapid Scaling Up?

By actively removing bottlenecks, management act quickly to maintain rapid progress. With a limit – it can be a set number – of tasks within the ‘In Progress’ column/board, staff get the feeling that they’re making positive steps in the right direction. Tasks quickly pass over to the ‘Done’ column/board and they can now move untouched tasks across to get started on them.

When scaling up production, capabilities or product launches, the number of tasks to get through within a given period increases considerably. Using effective task and project management processes, companies can push through tasks at a faster pace because of increased efficiency. It becomes clear early on with better visualization of tasks when the system needs more workers to get through the workload. This is because with efficiency managed, it comes down to the current capacity of the team.

Expanding the team becomes necessary at that point to increase its overall capacity when no greater efficiency can be squeezed out of the system.

Is There Just a Single Kanban Board in an Organization?

Multiple Kanban boards may be used within a single organization. There might be one for an individual, a team, the team and their manager who is linked together, and departmental and CEO Kanban boards too. It all depends what’s advantageous to the company and its systems.

When you are interested in becoming more efficient as an organization and preparing to scale up, a change in project management is often beneficial. It assists teams in taking an overview approach to the outstanding projects, and not only from an individual perspective. Managers are better able to visualize bottlenecks and capacity limitations and act to recruit and train new staff to remove the current limitations too.