Home Stories Paralleling Generators: What You Should Know About Load Sharing
Facebook
WhatsApp 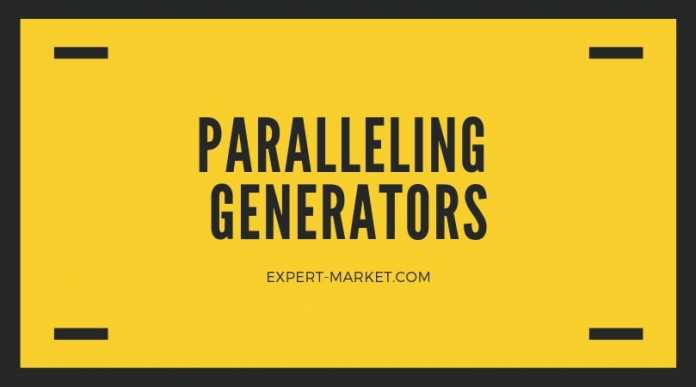 Generators are great for remote locations or emergency situations, but not all models are created equally. Some generators simply won’t have the power output or capacity needed,

and pushing these generators too hard can cause them to break down prematurely. If running a large operation, it can be vital to have multiple generators working together to produce optimal running capacity as well as maintaining the efficiency of your generators.

For those looking to learn how to cut energy costs of running separate generators, a useful tactic to be taken advantage of is paralleling your generators. By using this method, you can cut down on energy and maintenance costs, while increasing your power yield and capacity.

When two generators are parallelled it means they are working together to get the job done while using the other for support. This is similar to two people carrying a heavy box as opposed to just one. The job gets done just the same with less stress on the people carrying the box.

To pair generators, you must synchronize their outputs through syncquencing their voltage and capacity/speed modes. This requires at least two electric generators. If the generators are compatible, the process can be done quickly, but it is more time consuming to attempt to pair incompatible generators.

Even that complicated process is worth the effort because of the many advantages that come with uniting your generators to run on less energy and produce more load capacity.

If you are learning about load sharing, one of the basic advantages you’ll notice is how load sharing in parallel generators creates a larger power capacity. A generator will try to store as much backup energy as possible to run longer and more efficiently.

If you try drawing too much power from this reservoir it will be depleted causing your generator to run sluggishly. With two generators you will have twice the power with both generators splitting the workload.

When both machines are functioning above a certain capacity, they actually use less energy. This is because each machine does not have to work as hard to keep everything running for itself.

One generator will have to burn more fuel than two generators would in order to get the same amount of power. Many smaller generators can actually use less energy than one larger generator. After generators work at 75 percent capacity, they are at their maximum fuel optimization.

The cost of large generators can put a hold on your growing operation if you cannot afford to purchase it. You can increase your amount of small generators slowly as the business grows.

This is especially useful if you need the large generator to hold many different loads that cannot be processed in correct sequence because of variety. Separate the loads on several small paralleled generators.

If there is a need to collect more power than one generator can give, another generator will make up for this when they are paralleled. This also reflects the increased reliability for the generators to ensure there is a non-stop flow of energy to critical loads.

Most generators can be paired together with some additional maintenance. Some generators simply will not work together. If you believe you have the need for a generator, after looking into the most reliable models, consider purchasing multiple of the same kind to ensure they match.

If you have to generators you want to sync that are not compatible, you may be able to contact a professional to change the sequence of operation. A professional may be uncalled for if you are mechanic savvy and are willing to research the exact process to ensure incompatible generator load sharing.

The particular standards you must follow to successfully load share are not complicated if all aligned properly.

Fires can quickly catch when electrical components become overcharged. Do not try to rig together two generators that are not compatible and avoid creating a complicated chain of cords and cables. These methods are unsafe, so always examine your options to get the job done as safely as possible.

Water can also be dangerous to generators. Some models are meant to be used outside and will not be bothered by rain, but even large amounts of water may still damage these generators.

Your generator should be placed in a location that will receive as little water as possible. Depending on how hard the generators are pushed some models get very hot and should be left with room to vent.

Always make sure to follow any safety guidelines specific to your generators.

Exact synchronization is important because the final output of the generators must be completely in phase. This means, dependant on the load, the output must have a matching frequency.

The synchronization also calls for having the same voltage. Most problems associated with generators that should be easily paralleled, but will not link are a slight variation in voltage or various power outputs.

The larger a generator is, the more expensive it will be and the more it will cost to replace it if it breaks down. Chaining together smaller generators can save you money. If one breaks down it is always cheaper to replace one piece rather than the entire rig.

Using many generators that are not sharing loads could be costing your business money. You can utilize your energy costs with paralleled generators and increase their power capacity compared to them being used separately.

Load-sharing can be smart for a growing business where the utilization of small generators is vital. Take time to see if paralleling your generators could successfully generate you more savings and power capacity.