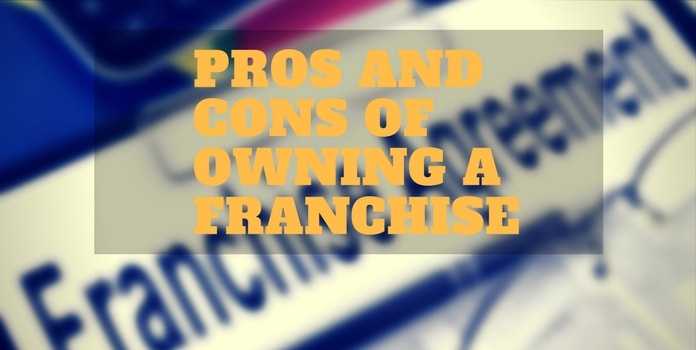 1. You don’t have to build from scratch

One of the major advantages of owning a franchise is that you don’t have to make it from the bottom level. It is all set up and ready for you. Whatever thing is needed to make your business or company run is ready for you to use. All you need to do is be shrewd and employ all the resources that you have to maximize the profit. You would never be required to undergo any problems that occur while setting up an entirely new business. In a franchise, someone else has already undergone that and made up the company and now you just have to run it in a way so that you can gain from it.

Another major advantage of owning a franchise is that your employees will get a good training regarding the job from the parent company. This will in turn benefit you in running your company effectively and with greater profits. This training program is usually conducted after you sign the agreement of ownership of the franchise. So it will give you a complete idea about the business and how it should be operated. The training will also help you understand the various policies which will in turn be of benefit to the parent company.

3. You will get a established systems

You won’t have to create an entirely new system for your business if you own a franchise. Making a new system is very much costly and when you are getting all the computers set up in place and all the softwares ready to use, why not grab the opportunity? You don’t even have to worry about the operating system. You just have to use what you get wisely and prudently.

4. Support will be provided

In most cases, franchisers give a lot of support systems which are very much important if you want to run the business smoothly and at the same time make considerable amount of profits. You would need support to man all the telephones and communication systems and also for manning also those computer systems. Getting so much manpower in a few days of taking over the business is indeed very much difficult so when the franchisers have the option of providing it, don’t miss the opportunity.

5. The name is already recognized

When you start an entirely new company, time is required for that company to make a mark in the market. But when you own a franchise, you don’t have to worry about the name as it is already recognized. Sometimes it so happens, that  your start-up won’t be able to become recognized in this competitive market but with a franchise you are getting the benefit of already having a name and a recognition.

When you see the bigger picture, you will realize that owning a franchise reduces the overall cost to a great extent. You will get everything in hand from technology to support systems to marketing campaigns. You won’t have to spend on them separately but still get the benefit.

Best part of owning a franchise is that the brand value is already there and you do not have to invest in marketing. Marketing in any type of business is most crucial and expensive task.

1. The franchise fee will be quite a burden

The major disadvantage that most people face when they own franchises is the franchise fee. Although this is a one-time investment but the cost is huge. When you want to maximize your profit you would definitely want to go for the big and established companies whose name is widely recognized in the market. But going for such companies definitely means burning a hole in your pocket because they charge heavily and that is normal because you are getting everything set up. But again paying such a huge amount at a go is a problem for many people.

2. Too many legal agreements and contracts

Entering into a franchising relationship means being bound by too many legal documents and contracts. This ultimately leads to an inelasticity of the business. These agreements contain tons of restrictions. The main problem with restrictions is that you won’t be able to determine your own strategy many a time due to the chains binding you. Moreover these contracts require renewal after a certain period of time. That is where the twist comes in. If the company feels that you are not the right person to make a contract with then they won’t renew the contract.

This really effects if not from the figurative way but definitely psychologically. Would you want to share the profit you would get from your hard work with someone else? Of course not. But in most cases, a portion or percentage of the profit and gross sale always has to be given away to the franchisor. Now if you are not getting a good return but still have to give away part of your profits then it really becomes painful so be sure about these matters from beforehand.

4. You will not get much control over your business

Since the entire franchising business is so inflexible, you will not get much scope of practicing your own control over the business. It will never be that way. There will be several rules binding you so you can never implement strategies or campaigns according to your wish or how you feel would be better for the company.

5. Problem in selling the franchise

At first you may be very enthusiastic about making the franchise grow but you will eventually come to the realization that there are very little possibilities of growing the franchise. The main reason behind this is nothing but the rigid rules and restrictions and the tricky contract that is made. All these rules work together to give you a limited control over the franchise and thus very less potential for its growth.

Everyone like the idea of owning a franchise and making it recognized throughout the world. But the choice is always is your own whether or not you want to own a franchise business. Don’t just look at the pros or the cons. Keep both in mind and then make your choice.

Why You Should Consider Joining an International CRE Franchise